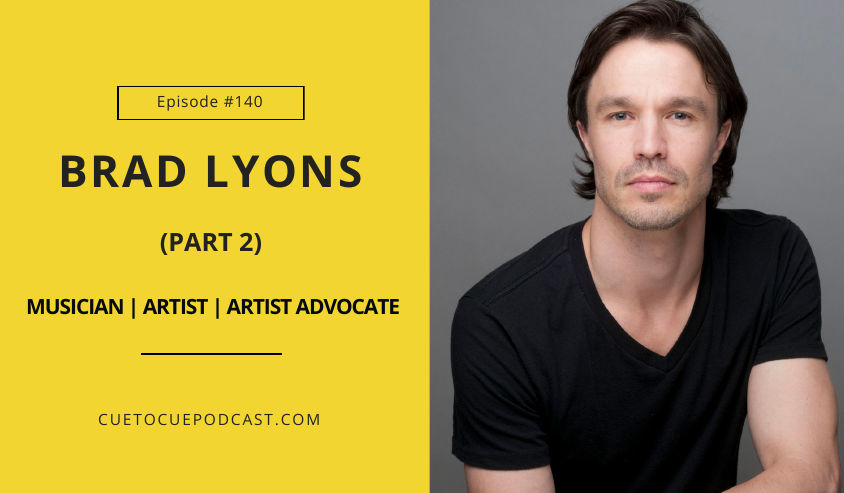 Musician, Artist, and Artist Advocate, Brad Lyons is joining the conversation on Cue To Cue Today!  Today is part is the second half of a two-part conversation.

Brad leaves nothing on the table in this episode opening up about his artistic journey. He also, throw down the gantlet in this episode and challenges every artist and every consumer of art to ask themselves hard questions about the current state of how we consume and acquire art.

A little about Brad:

Oceanship is the touring and recording musical enterprise of Brad Lyons — presently based in Waterdown, Ontario, Canada.

One month into his science degree at the University of Waterloo, Brad made the decision to focus on music. He ran an ad in the paper that read Experienced Singer Seeks Band, though he had no formal singing experience.

In 2003, for reasons of artistic divergence, Brad parted company with left Pencey members and formed Oceanship. In 2006 the Oceanship EP was recorded. The self-titled EP, packaged in hand- stamped paper bags (as all Oceanship releases are), did well domestically and internationally resulting in a PBS feature of track All The Kids, an XM Radio Verge award, and an extensive tour of China.

KCRW, the Los Angeles radio station famous for its discovery of emerging talent (Coldplay, Jeff Buckley), was quick to feature Oceanship’s track “Don’t Wear Me Out” on their “Morning Becomes Eclectic” program as Today’s Top Tune. Hotblack, another track from the album, went to #1 on commercial radio in Birmingham, Alabama, and its video was nominated for Best Music Video by The World Animation Film Festival alongside Coldplay. Multiple tracks from the Oceanship debut album have been placed in international TV shows such as One Tree Hill, Army Wives, The Border, Degrassi TGN, Rookie Blue, among others – fourteen TV shows and movies to date.

In 2018 Brad released Bella Blue, the follow-up to his self titled album. While music is best listened to rather than described — especially by the artist — David Gordon, the former Warner A&R who signed some of the all-time music greats, including Prince, Dire Straits, and Van Halen, has this to say about it:

“Bella Blue stacks up favorably with my all-time favorite CD (and that musician) — on all scores. Oceanship has a tough of the brilliant… the frequent use of the child's choir, a cappella no less, that bespeaks innocence and mirrors the songs on a meta-level; the crystalline brilliance of lines such as, ‘She said: Time is a wave, and it's drowning us', and more, so much more. Bella Blue is a keeper. I am wowed.

The problem with arts advocacy is two-fold. One, it involves few artists. The very party whose name is on the marquee has neglected to participate. Two, of the artists who are participating, essentially none are speaking about the core of the crisis — the shallow ethics of the average fan and the average artist.

The artist is the primary. Artists make art, and the fan and arts industry emerge from that art. In order to turn the tide of the arts movement, we must turn the primary. We must recruit a sufficient number of deeper artists under a common banner — a banner of depth. Artists United proposes to turn the primary by teaching them, or reconnecting them to, a deeper understanding of artist, including their roles and responsibilities. We propose to do this through a series of artistic live presentations and filmed vignettes to be aired online.

Artists United is an organization dedicated to teaching and promoting a new dimension of art and artist in an attempt to solve problems within the arts ecosystem and accelerate emerging consciousness.

Artists United explores the full artist. We go beyond the artist as simply a maker of artifacts. We strive to connect the artist to their core in a way that brings their purpose into brilliant definition.